I wanted to provide just a brief update about the 2018 project and the going’s on.  First, what is Design-Build Fly (DBF)?  DBF is an annual competition for university students whereby they will design, fabricate, and demonstrate the flight capabilities of an unmanned, electric powered, radio controlled aircraft that can best meet a specified mission profile.  The mission profile changes each year, the goal of which is… “balanced design possessing good demonstrated flight handling qualities and practical and affordable manufacturing requirements while providing a high vehicle performance”.  The competition also requires a detailed proposal (i.e. report) which is a significant part of the competition score.

The competition is put on by the American Institute of Aeronautics and Astronautics (AIAA) and sponsored by (among others) Textron Aviation, Raytheon Missile Systems, and the AIAA Foundation.  The competition is held, biannually, in Wichita, KS and Tucson, AZ.  This year, as in 2016, we’ll be going to Wichita April 19-22.  Learn more about DBF here:  http://www.aiaadbf.org/Rules/

CU has perennially participated in this event and is both well staffed and funded.  I am told that every student in AES (at CU) will, at some point in their academic career, participate in DBF.  The faculty advisor for CU DBF is Dr. Donna Gerren.  We have assisted other teams in the past from CO School of Mines, North Dakota State University, and Cornell University.  I flew for Cornell in 2016 who finished in 8th place that year.

This year’s CU team has been very exciting and fun to work with.  As usual, these very talented and bright students have many great ideas for their vehicle design and are willing to try anything.  They also show a very significant commitment to this project despite their rather heavy academic work-load.  Dan Underkofler and myself have spent numerous hours going over designs, construction techniques (for models) and flight testing.  This is the first time that we have had 3 prototypes with which to improve the design, construction and flight characteristics of the vehicle.  I’m amazed at how their building skill and proficiency has improved with each new prototype.

They now have prototypes #2 and #3 which have demonstrated flight and could be used in competition.  The latest version #3 was flown last weekend (4/7), with great success, and with multiple power and payload configurations.

I have the pleasure of being the primary, designated pilot as Dan will be unavailable the weekend of the competition.  Thus, we are in the final planning stages.  I will meet the team in Wichita on Friday (4/20) morning for a mandatory pilot’s meeting.  3 missions will be completed Friday through Sunday, with the winner being announced Sunday evening.

Attached are pictures of prototype #3.  This model is only about 24” long with a wing-span about the same dimension.  It is powered by either a 7 or 8 cell Nicad battery.  It is made with numerous composite materials and many parts were fabricated with a 3D-printer.  If you look closely, you will also see “laser-cut” balsa and ply components and the gear is machined aluminum.  These guys have all the toys at their disposal!!!

Speed will be part of the competition, but we have struggled with stability at full throttle.  Nevertheless, it does have a fairly wide flight envelope, will fly very fast, and is manageable to take off and land.  We are able to complete a “lap” which consists of 500’ upwind pass, 1000’ downwind pass including 360 degree circle back at center, then 500’ back upwind in about 30 seconds.  One mission will be to complete as many laps as possible within 10 minutes, with a successful landing. 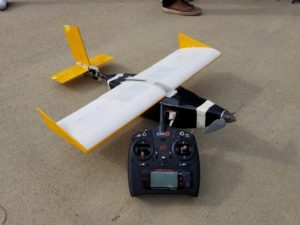 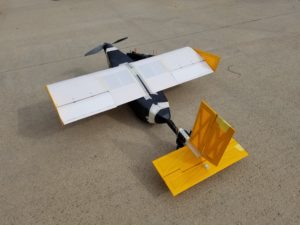