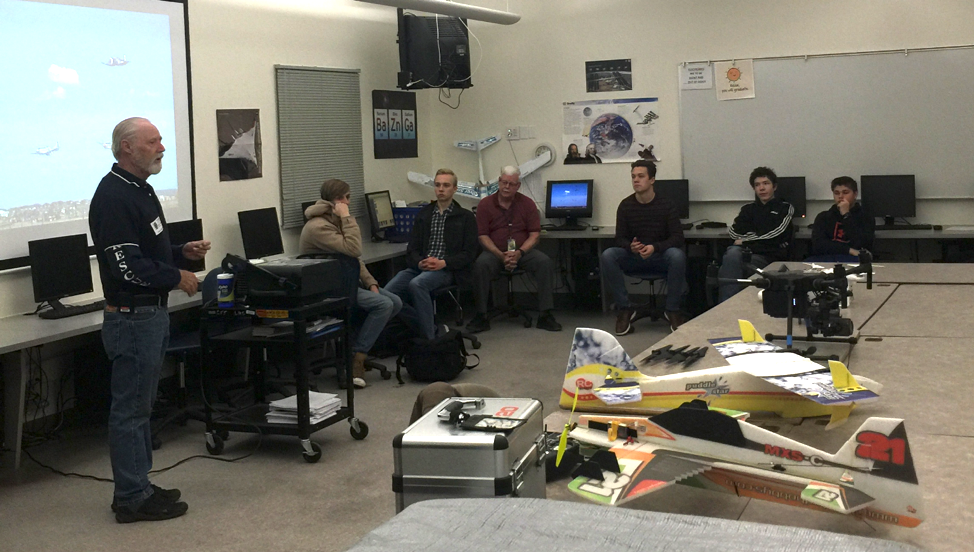 On February 10, 2020, Arvada Associated Modelers visited Legacy High School in Broomfield. Ted Hughes and Brian Dillman met with teacher Al Godman’s aeronautics class and talked to the young folks in his class about our club, the RC hobby, training, and professional/commercial applications for RC flying. Regarding professional/commercial flying, Brian brought one of the Boulder Fire Rescue Department drones to demonstrate and to talk about how it’s used in search and rescue, law enforcement, and other ways. This was a terrific opportunity for the students to get a look at career opportunities available to them flying drones. The students were engaged and asked a lot of interesting questions. It was very cold and too frigid to fly outside, so at the end of the class everyone went to the gym for demonstration flights. Ted flew a foamy and Brian flew a quad. We hope to see some of the students at club training.

Nichole and six girls (8 to 11 years old) from the Church of Jesus Christ of Latter-day Saints Mormon Church located in Arvada near West 64th Avenue and Quail Street visited the field for an introductory flight. Everyone had a terrific time. Thank you Pat and Dewey Louderback, Eric Gropp, Jim Hagberg, Bob Lenhardt, Paul Kling, Frank Barnard, and Dick Snyder for helping. The young girls’ excitement and energy was electrifying. On Tuesday June 7, 2016 our club was invited to attend and demonstrate our RC airplane hobby at a Cub Scout day camp. The camp was at Ellis Park up on Lookout Mountain and there were about 150 scouts aged 6 to 11 years old, plus adult leaders, parents, and siblings.

Dewey, JD, and Ted had a great time answering numerous questions, talking to them about how RC and control line airplanes work, and flying their airplanes in the park. The scouts, other kids, and adults enjoyed and appreciated the demonstration. There is no doubt that some of them will be visiting our field for demo flights and training.

On Monday, February 1, 2016 Arvada Associated Modelers visited Legacy High School. JD, Dewey, and Ted met with teacher Al Godman’s aeronautics class and talked to the young folks in his class about our club, the RC hobby, training, and professional/commercial applications for RC flying. It was snowing, so at the end of the class everyone went to the gym and JD flew a quad and a Vapor.  One student brought and flew his quad. We hope to see some of the students at Thursday training this spring.

On Friday, December 11, 2016, Dewey Louderback and Ted Hughes attended a meeting of Girl Scout Troop 3572 and talked to them about RC airplanes. Their interest, enthusiasm, and excitement was fantastic. There were 16 Girl Scout Cadettes who are learning about different aspects of air as part of a “Breathe” journey. They will also be building kites to participate in the Arvada Kite Festival in April and visiting Wings Over the Rockies.  They hope to develop a new badge program for Girl Scouts of Colorado that would include RC modeling because of all of the STEAM activities troops could do (science, technology, engineering, art, math). They are looking forward to coming out to the field and learning to fly in the Spring.

Dewey and Ted had a terrific time talking to them and answering their questions. They were challenged with over an hour of very interesting and intelligent questions from the scouts. On Tuesday October 13, 2015 Arvada Associated Modelers visited Legacy High School. Pat Vachon, Dewey Louderback, and Ted Hughes met with teacher Al Godman’s aeronautics class and talked to the young ladies and men in his class about our club and the RC hobby. At the end of the class everyone went outside and we flew some airplanes. One student brought and flew his Stryker. February 5th 2015, the Arvada Associated Modelers Club attended Legacy High School; in particular Mr. Godman’s aviation class. The class was made up of approximately 15 high school boys who are interested in aviation. On display we had numerous foam fixed-wing aircraft, a gyro copter, a quad-copter and a large scale aerobatics 28 lb. airplane. In addition Joe Falconer brought his hexacopter with a 3 axis gimbal and live feed camera.

ed started us off talking about the club and promoting our flight instruction. The class gathered around the large scale aircraft that Ted brought. The students asked relevant and thoughtful questions about Ted’s aircraft. We discussed how the plane works, the amount of electronics on board and approximate costs. He tied it into AAM’s training program and the students seemed very interested. Pat then talked about his aircraft and showed the functionality of his foam aircraft. There were a lot of questions for Pat about how much his aircraft cost and how hard it was to fly. Dewey then told everyone about his scratch built gyro-copter and explained how stable the design was. Finally Joe explained his hexacopter and how the 3 axis gimbal works along with an explanation of the future of UAS. A lot of questions revolved around cost.

Once we were done with the conversation portion of the demo we went to the gymnasium to demonstrate the capabilities of the multi-rotors. Pat went first and showed how stable his multi-rotor was indoors. Apparently if you can get the quad to use your head as a reference point it will follow you around as you walk. The students seemed to enjoy the demo that Pat gave. Joe was next to fly his hexacopter. He explained how he needed to calibrate the compass then gave a student a remote to control the camera. He also brought FPV equipment so the video signal was transmitted to a monitor the students could see. In addition Joe brought a pair of FatShark FPV goggles and the students took turns looking through the goggles.

The flight portion was uneventful and the students seemed to be enjoying themselves. Multiple people asked about the flight instruction that AAM offers. We expect we will see some of them at the field in the near future.

On Thursday, January 22, a few of our club members visited Little Elementary School and taught some children how to build AMA Cubs, a balsa and tissue rubber band-powered airplane.  After the glue had dried, our AAM members returned to the school on Friday, January 23 and watched the kids fly their airplanes in the gym.  What fun! A few AAM members went to Legacy High School in Broomfield on February 4 to present to their aeronautics class about flying quad helicopter drones.  The drone was controlled via physical movements of an iPad.  The students loved the demonstration and they even had their chance at controlling the drone.

Check out the video from the demo – the drone had an onboard camera which recorded the students actions.